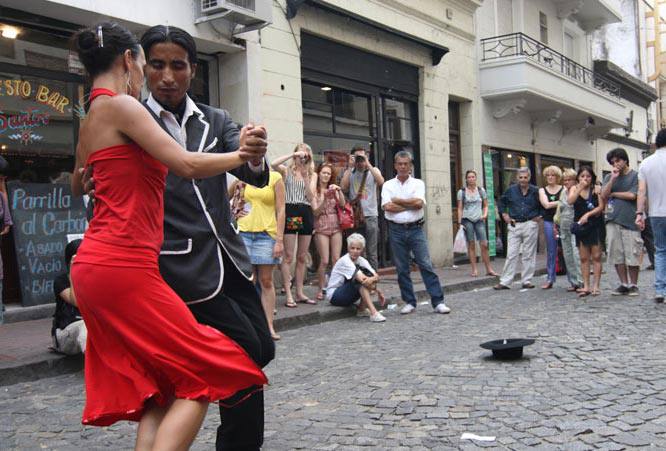 Visitors to Buenos Aires are seduced by the sophisticated urbanism and vibrant cultural life of a city that is both avant-garde and nostalgic. Argentina’s capital also attracts tango lovers from all over the world, and it’s the departure point for numerous tourism routes leading to its many treasures, including the spectacular Iguazu Falls.

With its magnetic personality, Buenos Aires exerts a seductive pull day or night. The heart of the capital is Plaza de Mayo, the square dominated by Casa Rosada (the “Argentine White House”) made famous by one of its residents, the legendary Eva (Evita) Péron. Her tomb in the Recoleta cemetery also draws visitors, as does the museum devoted to her life.

Just behind Plaza de Mayo and its classic architecture is Puerto Madero, the happening neighborhood that flaunts its avant-garde attitude, as embodied by its iconic bridge, Puente de la Mujer. Next, stroll down the majestic Avenida de Mayo and cross the amazing Avenida 9 de Julio, the widest avenue in the world.

With 140 museums, Buenos Aires is an art-lover’s paradise, and its fashionable boutiques and street markets will satisfy the most ardent shopaholics. When you’re ready for a break, find a seat at one of the city’s many charming cafés the renowned Tortoni, it was established in 1858 and its décor and ambience have remained unchanged over the years. And if you’re a soccer aficionado, it would be a sin to miss a match while visiting the land of Messi and Maradona!

Argentina is known for its meats, and evening meals often feature copious amounts of asado (barbecue), washed down with local wines. Keep in mind that Argentinians follow Spanish custom when dining—meaning they eat quite late. You can also take in the thrumming cultural scene in Buenos Aires, which boasts one of the world’s most prestigious opera houses, Teatro Colón. There’s more than enough night life to choose from here, including theatre, cinema, high-octane nightclubs, and naturally milongas, the dance events that helped spawn the tango.

Buenos Aires residents—or porteños—consider tango, an art form that embraces dance, music, poetry, and singing, to be a main embodiment of their identity. UNESCO agrees, and has included the tango on its list of intangible cultural heritage elements. Enthusiasts flock to Buenos Aires from all over the world to be initiated in the tango. True fanatics dream of going to Argentina to dance it at milongas, where couples move to the music of a live orchestra. Tango shows are also presented in cabarets, theatres, and even in the street, because in Buenos Aires, the tango is everywhere.

The gateway to an amazing country

While Buenos Aires alone is well worth a visit, don’t overlook the countless tourist attractions elsewhere in Argentina. In the northeast, the Iguazu Falls on the Brazilian border are generally deemed the world’s most spectacular waterfalls. This natural wonder has been carefully preserved in a vast national park. To the west, the Andes mountain range (or cordillera) is home to shimmering lakes and upscale winter resorts where skiers from the northern hemisphere can indulge their passion—in July! South of the capital there are the expansive pampas, dotted with picturesque cattle ranches called estancias. Welcome tourists are eager to sample the cowboy lifestyle of Argentina’s gauchos. Still farther south, Patagonia stretches all the way to Tierra del Fuego, where intrepid travelers can enjoy a foretaste of the Antarctic.

At night, don’t bother looking for Ursa Major in the Argentine sky—search for the Southern Cross in this part of the world. This southern hemisphere constellation may remind you that while you’re far from home, your Blue Cross travel insurance is protecting you against any mishaps that occur on your trip. Before you venture abroad, talk with one of our agents to select the plan that will be best for you while you’re away.